How does a global company ensure diversity and inclusion?

We caught up with Deborah Richards, IBM’s Diversity & Inclusion Leader UK & Ireland, and this is what she told us about how the company’s culture and policies drive inclusion.

It is part of our DNA

“The people who founded IBM 106 years ago had a very strong belief in inclusion. We hired our first disabled employee in 1914. We had black executives when there was still discrimination in America. In 1953 our CEO Thomas Watson wrote a letter to all employees saying IBM will not discriminate on the grounds of colour, creed and belief way before any legislation and any thought of inclusion.” 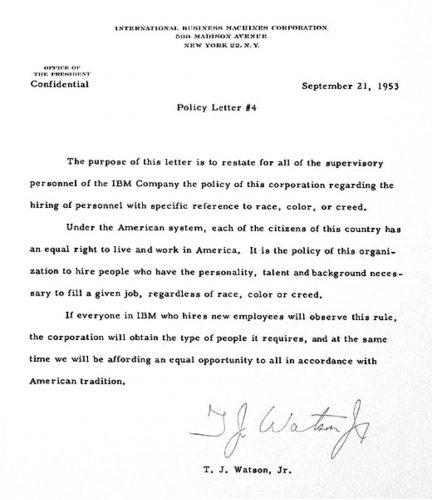 “Our policies are global. Even in countries where for example it is illegal to be gay, we still stand by our policy of inclusion for all employees.. When we deploy people in a same sex relationship around the world then we think long and hard about whether it’s the right thing to do for them and for their safety. We have many conversations so they know that they have our full support.”

“If employees don’t want to discuss personal matters with us, then that is fine. If they want to talk about their partners, their family life, that’s equally fine. It’s about being very clear that inclusion is about everyone.

“Ally programmes have worked well – I am proudly wearing my ally badge! We have an excellent ally programme for LGBT. This year for PRIDE we even had a rainbow logo, and IBM never tampers with its logo. This sent a very powerful message about IBM and diversity.”

Our diversity groups are dynamic

“In 1995 we created global task forces to address specific diversity needs. It was a combination of addressing the needs of employees top down and a grassroots movement where people wanted to know where other Hispanic, or LGBT or disabled people were working, so they could learn from each other.

“Our networks are physical and virtual. 1995 was a time when the Internet began to connect people virtually. Our employees are spread all over the world, some working at client sites, and technology suddenly allowed them to connect.

“We have a thriving mass of virtual communities. For example, Connecting Women has an overarching chapter, and then there are sub-chapters for every location, and then a sub-chapter for women who are technical.

“In the UK, I felt very strongly that we needed discrete groups so that people can come together with a shared agenda. I’ve taken a lifecycle approach and looked at employment from day one to retirement, and the points in your life when inclusion will be important to you. It’s thinking about all those milestones in your life when diversity could actually do something useful for you, when our policies could be supportive.”

Some problems are bigger than IBM

“We talk to government a lot about technology and STEM. I think our education system is partly responsible for the gender issues faced by technology companies. So many young women opt out of STEM subjects. We really have to fundamentally change the mind-set of government and educators to ensure that young women see STEM as an area of huge interest, opportunity and where they can have a very good career.

“We’ve been running projects in primary schools using Raspberry Pi computers and children learn to create simple programmes to check that you’ve washed your hands when you go to the toilet, or that you’re watering the plants during the holidays, switching the lights off at the end of the day.

“It’s when girls are forced to make a choice about whether they are going to be technical that there is peer pressure at secondary school. If we had a system like the baccalaureate where you have to do a combination of subjects including maths and science at A-level I think we would stand a much better chance.”

Age is important to diversity

“We have five generations in our workforce, from age 16 to 71. Our new grads, interns and apprentices are much more diverse than they used to be, and much more demanding too – they will tell you what they want. They are confident, they are articulate, highly motivated. It’s a joy to work with them because you learn so much. I’ve learnt how to Tweet, I’ve learnt how to use a Slack channel.

“We still face challenges around unconscious bias, so I run training sessions for all  of  the business. I challenge people to think, is this the kind of environment that you want your daughter or your niece to work in?

“We also use reverse mentoring where the young mentor the more mature and that works very well.”

I am the grit in the oyster

“I’m always challenging the boundaries. I define my job description as being the grit in the oyster.

“I remind people that work is a completely artificial construct: it is what we make it. So think differently about the way you define your jobs and your roles. It doesn’t have to be what it’s always been.

“For example in our consulting business I would be told it was impossible to job share, it just didn’t work, no client would have it and they wouldn’t talk to the client. So I challenged them to try it and it worked. There are options to split the bands so that it the job share is cost-neutral. This means there is a very senior experienced person job-sharing with a talented junior person that is being developed.”

We use our influence to drive positive social change

“IBM stood against the Bathroom Bill in Texas. This was about not allowing transgender people to choose the toilet they identified with. We have many  employees in Texas and we said very clearly that we did not like this policy and we worked to influence as many people as we could. The Bathroom Bill was not passed and I think we can take some credit for that.”

“Diversity requires constant nagging. It’s incremental. You have to keep reminding people to check that the decisions they make are balanced and fair.

“My dream would be that my job did not exist, because by then we would have created  a really inclusive environment, the policies and the mind-sets would be inclusive, and  I would have worked myself out of a job. That would be my nirvana.”

Equality for women: what’s the problem?

Wendy Cartwright – Chair of GDP Advisory Board – June 2014 Without doubt, western society is more tolerant now than it was in the 1970s, when equality legislation started to establish rights that we now take for granted.  Over the years, organisations have gradually moved away from pure compliance and the concept of ‘levelling the […]

Yves Veulliet – Global Disability & Inclusion Program Manager (IBM) – May 2014 “I would like to share with you a part of my personal journey and the intimate connection that exists between the private and professional experiences of an individual. On the 12th of July 1987 at noon I was part of the comfortable […]